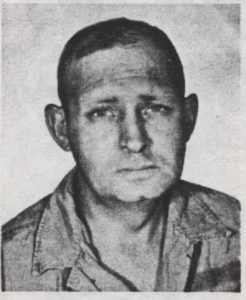 I served in Japan twice, Vietnam twice, Germany and Korea. While on my first tour in Japan I met Nori Kobayashi, who worked for the 94th Engineer Maintenance Company.  We dated and eventually married on May 12, 1953 in Yokohama, Japan.  On March 8, 1954 we welcomed a beautiful baby girl, Mary Jo.  In 1957, while in Hanau, Germany, I completed and received my G.E.D.  During the summer of 1966 I was assigned to the 591st Engr. Co. stationed in Ft. Campbell, KY. In 1967 the unit went to Vietnam for it’s one year tour of duty, in which I was maintenance platoon leader and headed the motor pool area. I retired in September 1971 after 20 years of service.

After retirement I volunteered at the Center for Creative Living and McMahon-Tomlinson Nursing Center.  I loved gardening and working with my hands.  I loved helping my wife Nori’s widowed friends with carpentry, plumbing and whatever else they needed.  My friends called me “Mr. Fix”.