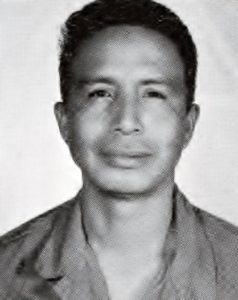 Raphael “Chief” Norbert Wahwassuck was born May 9, 1930 in Mayetta, Kansas. Chief, who was also lovingly called Booger by some, was raised on the Prairie Band Potawatomi Reservation and he was a proud member of the Prairie Band Potawatomi Nation. He grew up with 11 siblings and a cousin Luther. He attended an Indian Boys School in South Dakota and did many jobs as a young man, including time as a professional boxer. In 1952 he found his calling when he joined the Army.

In 1957 Chief met the love of his life, Erna Pasika Pfeiffer. Erna, Chief’s “German Girl”, was born and raised in Nuernberg, Germany where they met and married on Januay 10, 1958. They shared over 53 years of marriage together and were blessed with four children: Josetta, Raphael, Jr., Brigitte and Ingrid. Erna passed away August 17, 2011.

In 1974 Chief retired as a Master Sergeant at Fort Leonard Wood, Missouri. During his Army career he had two campaigns in Vietnam from 1968-1969 and from 1970-1971. He achieved many awards for outstanding merit including two Bronze Stars and an Army Commendation Medal. After many temporary duty deployments and being stationed in different locations, Chief and his family settled down in Waynesvile, Missouri.

After retiring from the Army he worked as a supervisor at Fort Leonard Wood transportation motor pool for several years. Chief became a champion for the Disabled American Veterans (DAV). He was a Missouri State Commander for the DAV, Commander of the Harry L. Herron DAV Chapter 49 and a member of the 591st Engineer Company-Sapper Association. In addition to his DAV responsibilities, Chief was instrumental in bringing a Missouri Veterans Cemetery to Waynesville.

Not only was Chief an outstanding professional soldier and champion of the Disabled American Veterans, he was a dedicated father, a Boy Scout Master and influenced the lives of many young men. Chief taught many across the United States about American Indians and history. He was a well-known speaker. His qualities and character were passed onto his children who are successful professionals in their fields of employment and all in service of others.

Chief passed away Tuesday, September 29, 2015 at the home of his daughter and son-in-law having attained the age of 85 years, 4 months and 18 days.