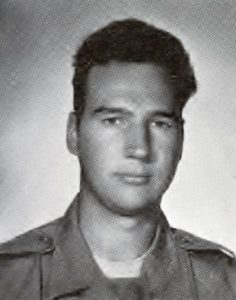 Two weeks after graduating from high school in 1965 I found myself working for a high-tech forge factory in the machine shop.  This was brought on by my Father who stated upon graduating, “What are you going to do now Son?”  And since he worked there I had no choice and a bit sooner then I planned.

Since my draft number was getting close I enlisted in March of 1966.  I wanted to be a heavy equipment operator, but the recruiter talked me into maintenance.  I had basic and AIT training at Ft. Leonard Wood and in Aug 1966 I received orders for the 595th Eng. Co. (LE) at Ft. Riley, KS.

Before I even got off the bus some jerk was singing “you’re going to Nam.”  I kind of knew that.  We did go in February 1967 and set up base at Blackhorse.  I spent the first four months assigned to a contact truck in and around the Mekong Delta area.  When I returned to base the unit was now at Bearcat.  Spent two months at the base motor pool.

In August 1967 I was transferred to the 591st Eng. located at my old base in Blackhorse and was assigned to the motor pool under Sgt. Don Kassik.  Finished my tour a SP5 and left just after Tet in February 1968.  As luck would have it, I spent my remaining year at Ft. Harrison, IN.  First by being a KP supervisor in a mess hall that could feed 2000 GI’s at a time and the final four months as a dispatcher for the civil engineers.

Being transferred to the 591st was the best thing that happened to me while I was in the army.  From the Captains on down to the barrel burners, they were and still are the best Brothers I could ever have.  And I THANK Jim Miller for getting our group started.  Love you all.