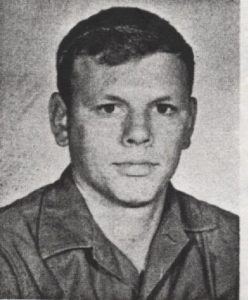 After joining the Army for their world wide tour, I was sent to Germany for a year of german ale headaches.  Got tired of the place and volunteered for a trip to Asia.  The Army took me seriously and sent me to Vietnam in July of ’67.  I spent a couple of months with the 27th Eng. Co and after the 591st LE Co came to join us at Blackhorse, I asked for and received a transfer to the 591 as they had REAL heavy equipment.

October 1967 I was assigned to the first Plt as a dozer operator.  Was tdy’d with my dozer to the ARVN camp at GIA RAY.  Spent that Christmas with them.  Returned to the 591 at the GIA RAY camp as the ROME PLOWS were arriving.  They were converting my dozer to the plow kit.  While they were working on the dozers, Lt Berry, Jimmie Blisset and I were heading back to Blackhorse Base Camp on January 16, 1968 and were hit with a Claymore mine.  Lt Berry was wounded in the knee, I in the arm and ribs, Jimmie died in my arms.  I got to know and love his family in Texas after returning home in January 1969.

After being wounded they put someone else on my dozer as I had rib problems.  Shortly after we moved from III corps to I corps at Camp Eagle to support the 101st AB.  I extended for 6 more months to avoid state side duty.  I was made Plt Sgt and moved to HQ plt a short time later.  Finished my time as Operations NCO and helped out in comunications part time.

Headed home New years eve of 68.  I met many brave and neat guys in the 591st.   I WAS PROUD OF OUR UNIT and its men.  I do miss the TURKEY LOAF rations.

After returning home I met my wife Becky.  She is a great supporter of veterans and a lot of strength to me.  We had three children together and now have ten grand children.  Our 40th anniversary is this December.  Becky is my love.  She has enjoyed the 591 reunions with me, and has made many friends there, as have I.