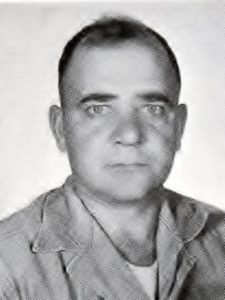 I was born in Chicago and at age 7 my family and I went to Poland.  I lived there from 1936 till 1947.  Yes, I lived there when Poland was occupied by German forces and later, the Russians.

During the German occupation I was in hiding so as not to be taken to a concentration camp.  During the Russian occupation I did the same , but there I did not want to be on labor force for their military.  Since we had an 80 plus acre farm I needed to stay nearby and work on our farm.  My Dad passed when I was eleven so I had to stay close to home.

In 1944 when the Russians occupied Poland, they announced if any citizen born in a different country wished to return there, they may apply for visa and a passport and go.  Thanks to my mother, she forced me to apply for my papers and return to the good USA and in 1947 I returned and lived with my aunt in Lowell, MA.

My military life began in January 1949 with basic training in Ft. Dix, NJ.  After basic training I was assigned to the engineer unit in Camp Gordon, GA. (Now Ft. Gordon.)  I was thrilled to work with heavy equipment.  There I learned to be a crane operator but I also learned and had fun to operate MRS tractor, graders, dozers, euclids and M290.  I learned them all.

In 1952 I returned and was assigned to Walters AFB in Texas.  Within a year I was back on orders for France.  After being with the unit for about a year, I was made NCOIC for well drilling platoon and we went to Phalsbourg AFB to drill wells for that base.  The base had no buildings yet, so we lived in a hotel in town called Saverne.

In Saverne I met my sweetheart Jackie and in summer 1954 we got married.  Our lives are happy, maybe because we had to exchange our vows 3 times.  1. French City Hall.  2. American Chaplain.  3. Catholic Church.

Returning back to the States I was assigned to a transportation unit in Ft. Eustis.  From there I went to Korea and from Korea I was assigned to engineer school as crane instructor.  In 1966 my assignment was to the 591st in Ft. Campbell, KY, going to Vietnam.  In Vietnam I built a road at the quarry site in Gia Ray, then went with the unit near Hue.  My platoon was assigned to fire support area (Bastogne) to clear a perimeter and build a road, too.

After returning to the States I went back to engineer school and was assigned as operations NCO for the heavy equipment.

After my retirement from the service I was employed by Sears & Roebuck.  Jackie and I have 4 children.  Two sons and two daughters.  Our oldest daughter passed away in 2007 from cancer.  We have 7 grand children, 2 of which are in the service.  One is a WW2 a helicopter pilot and is in Afghanistan now.  In addition, we are blessed with 4 great-grand children, all girls, living in Ft. Campbell.

That is the story of my life and to continue, I am very grateful to Jim Miller, that after so many years he managed to get such a great group together for reunion and to continue for many years.  Yes, and it is with profound pleasure to get together with all the men that served together in Vietnam.  And now, as well, with other young men in the 591st that are serving in different parts of the world.